the match will be commented live on Chessdom.com

The venue of Kamsky – Topalov

Fresh information about the Kamsky – Topalov match has been reported by the Chessdom.com media correspondents for the match. The venue of the event will be the 6th Hall of NDK (The National Palace of Culture), one of the emblematic buildings of Sofia. Gata Kamsky and his team of five people will be across the street at the 5 star Hilton hotel, while Topalov with his team will be at the 5 star Kempinski Zografski.

The FIDE Deputy President Georgios Makropoulos will arrive in Sofia on January 19th to inspect the facilities. He will stay for two days and prepare a report for FIDE. The inspection will include the NDK playing hall, the hotels of the players, and the accommodation for the FIDE representatives and arbiters. “This is a routine check of the agreement signed between the two parties,” commented from the organizing committee, “After organizing the Mtel Masters tournaments we have enough experience to meet the expectations.”

Zhivko Ginchev confirmed that the money and the FIDE taxes have been transferred before New Years Eve. At the question who will be watching for “hidden cables”, Ginchev replied, “There will be strict security measures, metal detectors, etc. FIDE has rules and responsible staff for that”. Full audio interview with Ginchev (in Bulgarian) can be heard at this address. 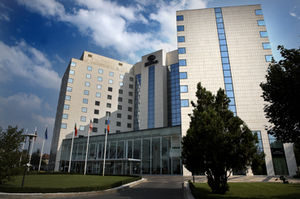 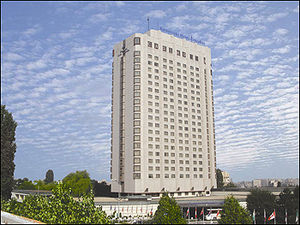 Chessdom.com is preparing special coverage for the Kamsky – Topalov match. The Chessdom team for the match will be of 7 people and you will be able to enjoy videos, photos, and multiple interviews from the playing hall. GM Dimitrov will be head of the team of commentators and he will have famous guests in the studio during the match.

GM Dimitrov has commented most of the major tournaments 2007-2008 including the Anand – Kramnik World Championship match. On the 17th of January GM Dimitrov will also comment the first event of the Chess Grand Slam Corus chess 2009.

The match will be on the Bulgarian National TV

The match Kamsky – Topalov will be broadcast on the Bulgarian National TV. They have signed a contract for the rights, but it is still unrevealed if there will be key moment direct transmission or the full games will be on air.

The National Palace of Culture (NDK is the abbreviation standing for the Bulgarian “Natsionalen dvorets na kulturata”) is one of the symbols of the Bulgarian capital, Sofia. It was opened in 1981 as the largest congress and conference center in Eastern Europe. For the construction of the NDK have been used 10,000 tons of steel, which is more than what was used in the construction of the Eiffel Tower. More interesting construction facts include the movement of 1 700 000 cubic meters of earth and the implementation of 335 000 cubic meters of cement. The construction was led by architect Alexander Barov and continued for 3 years.

The lobby of the National Palace of Culture

The total area of the facility is 123,000 square meters, with 8 floors and 3 subterranean levels. Hall 1 is the biggest with an area of 11 000 sq meters and capacity for about 4000 people. The 6th hall will be the venue of the Topalov – Kamsky match. It is 600 sq meters, 5 meters high, with a capacity for about 500 people. The hall includes TV and audio systems, recording systems, and a simultaneous translation system supporting up to 6 languages.