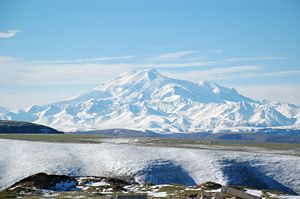 State flags of the participating countries will be placed on the square in front of the central entrance of the Russia’s biggest out-of-door theatre. Many-colored flags will also be hung on the hawsers of the cableway over the lake. Both black and white chess queens will come to the stage of Zeleny theatre on horseback. Organizers keep secret about the way the Prime queen of the event will appear with her retinue. Three masters of ceremonies will greet the audience in the Russian, Kabardian and Balkarian languages.

The program for the concert will include vocal-choreographic composition performed by children’s exemplary music groups of KBR, musical choreographic suite performed by dance groups of “Kabardinka”, “Balkaria”, “Terskie Kazaki”, and songs of KBR pop stars. At the end of the ceremony the audience will see water-pyrotechnic show and fireworks. 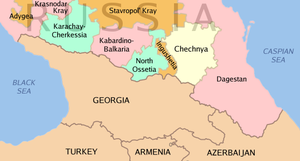 Kabardino-Balkar Republic was established in January, 1991. Nalchik is the administrative center of the republic. Its territory covers 12470 square kilometers: 100 km from the north to the south and 175 km from the west to the east. According to the Population Census of 2002 the population of the republic is 902 thousand people. Kabardino-Balkaria is a multinational republic, represented by more than 100 ethnic groups. The Republic consists of 10 administrative-territorial districts, 8 cities and towns, two of them are under republican’s jurisdiction, 4 semi urban centers. There are also 113 rural settlement administrations.

The republic is situated on the northern flank of the central part of the Caucasus and adjoining Kabardian plain.
Kabardino-Balkar Republic borders Georgia, Stavropol region, the Republic of North Ossetia-Alania and Karachay-Chercess Republic.
The republic is rather peculiar due to natural contrasts, original relief that combines dry steppes and semidesert zones in the north and floriferous plains of foothills, luxuriant alpestrine meadows and mountains, cliffs and unapproachable glaciers covered with everlasting snow in the south. There is a number of unique natural complexes and sights on the territory of Kabardino-Balkaria. Cascaded waterfalls in Chegemskoe gorge, famous Golubye Lakes, dolines and caves of the Malkinskoe gorge, etc. Mountains cover half of the territory of the republic with the highest Mt. of Europe Elbrus (5642 metres). 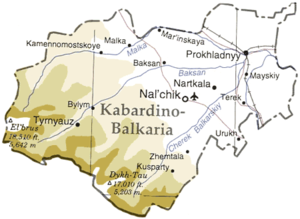 The location of Nalchik
Wikipedia.org

The capital of Kabardino-Balkaria, the city of Nalchik is in the center of the republic. It is situated at an altitude of 450-600 meters above the sea level, in the foothills of the Caucasus Mountains. According to the majority of scientists the city is named after the Nalchik River, on the shores of which it is located. The word “Nalchik” means “small horseshoe” in Kabardian. Nalchik covers an area of 150 square kilometers of which 1000 hectares is occupied by green belt. The population of the city according to the Census data of 2002 is 272 thousand people. It is an all-Russian resort. All agencies of State power are situated in Nalchik as well as an international airport, a railway station, and bus stations of interurban and suburban communication, recreation complex, stadiums, a hippodrome, a State University and other educational institutions.